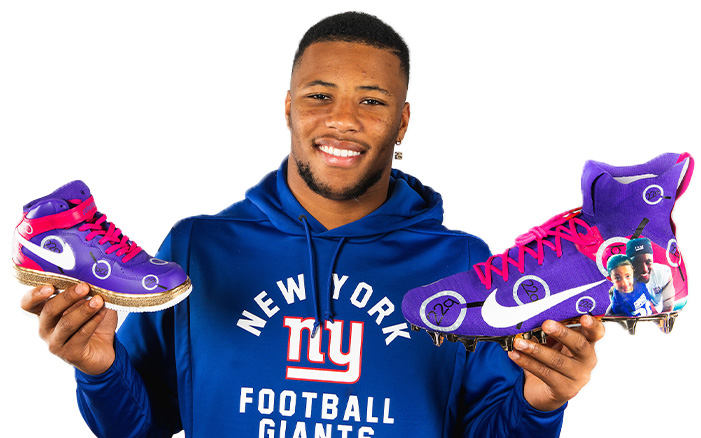 SAQUON BARKLEY – Championing the cause for the International 22q11.2 Foundation!

Thank you to Saquon Barkley for featuring the International 22q11.2 Foundation logo on his cleats again in 2019, to promote awareness of 22q11.2 deletion and duplication syndromes, as part of the NFL’s #MyCauseMyCleats league-wide campaign! We are truly grateful.

Saquon Barkley made his mark as a rookie in the NFL this year, shattering many NFL rookie running back records, including 3rd NFL Rookie ever to break 2,000+ yards in his first season, only 3rd player in the last 28 years to have 9 – 40+ yard plays in his Rookie season (3rd only to Chris Johnson and Barry Sanders), broke the NY Giants’ Rookie Rushing Record and won both the NFL Rookie of the Year for 2018, and the Rookie Offensive Player of the Year for 2018.

Although his work on the field was extraordinary; his interest in work off of the field left an indelible and heartfelt impression on those fans that have watched and supported him over his young football career. Saquon’s love for his young niece, Amirah, inspired him to bring awareness to a little-known, yet commonly-diagnosed condition as we know it, 22q11.2 deletion.

Saquon unveiled his first campaign to create awareness around 22q11.2 deletion/duplication, by sporting the International 22q11.2 Foundation logo on his cleats during the NFL’s #MyCleatsMyCause in December. He has since done several interviews about why he is bringing awareness to 22q11.2 –and, of course, we are overjoyed! Saquon has drawn us all closer together to celebrate the recognition of the condition and stand UNITED in cheering his success on and off the field each Sunday — we are truly grateful for all of the awareness brought to the forefront about 22q! In case you’ve missed it, here is a quick recap of Saquon’s outreach:

Saquon, continuing to make a difference especially during these trying times — and partnering with Pepsi to fight to make sure no child goes hungry during this pandemic!

Saquon Barkley wins the Pepsi NFL’s Rookie of the Year

Stay tuned here for more about our partnership!