Robin has been a feature story for us in the past, this time we want to share how she is working the front lines helping to educate others about the COVID19 vaccine.

Robin has been a nurse since 2010 and in the health care field since 2005 and says she comes from a long line of nurses, “I come from a line of nurses, most of the women in my family are nurses!”

She is currently working in an assisted living facility testing employees and patients for COVID19 and educating them about the vaccine. Robin who was diagnosed 22q deletion several years ago after the birth of her 2nd child stopped working at that time to be a nurse to her baby but decided to take a position with this team because it was so close to her home and she wanted to take baby steps back into working outside of her home.

When asked if she was worried about COVID for herself she said, “Even with having 22q I have a pretty great immune system, I don’t get sick easily. We have proper PPE in place while doing patient care. I was more concern with passing onto my family”.

So how does she protect her family after she has finished her time at the assisted living facility? “I have a pretty crazy routine of sanitizing myself before entering my house, so my family isn’t concerned with me working the frontlines”.

Getting the COVID19 vaccine is a concern for many in the 22q family, Robin has finally received hers and there were some side effects. “The first vaccine I just had a sore arm from the injection site. That lasted 48-72 hours. After the second dose, that evening I had a low-grade fever, body aches, and fatigue that lasted 6-8 hours. This is normal responses to the vaccine, it’s your body’s way of fighting and building immunity”.

Robin is thankful to be able to assist others and be on the frontline helping to protect!

McKenna is now a happy healthy 3-year-old. She started some remote learning preschool with our local school district and plans to fully start preschool in the fall of this year!   She will go to school with an IEP and home health nurse by her side but is super excited to start. Even though she still requires oxygen 24/7 nothing seems to stop her. She loves to play with her sister, loves her baby dolls and pretend play, she also loves to play with her ball and being outside and swimming as you can see.

She is able to eat everything by mouth now, food and fluid, but still some tube feeding at night. What she doesn’t eat by mouth we blend through her tube but most of her fluid is still through her gtube. We take everything in baby steps!

Unfortunately, January this year we were admitted to the hospital for the flu my worse fears ever, but she fought through like a champ.  Now since COVID we have been staying sheltered in place and spend our time just enjoying each other as a family.

I stopped working as a nurse …… in order to have the time needed to take care of my family. But I recently went back to work as a nurse at a local facility to help with the virus during this crucial time. Thankfully we are all maintaining good health and I have a strategy on how I enter my home after work! My husband has worked from home since the beginning of the lock down as well so we are all doing our part.

Over all we are happy and thriving. Not visiting doctors and the hospital as much, which makes life less hectic and more enjoyable.

Imagine you are 32, have a successful nursing career, married with 2 children and you are diagnosed with 22q! How could this be possible, one could ask…. Read on!

Robin Gramke was born December, 1985, 2 months premature. She struggled with feeding and reflux as a baby and toddler, having to be fed sitting straight up, by her parents.  Robin was healthy with no known medical issues as a child, although she did have speech therapy throughout her childhood and always had a very nasal-sounding voice. At age 14, due to an illness that turned out to be rheumatic fever and Sydenham chorea, she discovered she had a soft-closed palate, which doctors attributed to her premature birth.

Through Robin’s eyes, she lived a pretty normal, healthy life. She had lots of friends, and like most kids, loved and hated school– but performed well, especially in Science and Art. Even though she was bullied in elementary school for her nasal voice, she says, “I never let that bother or define me.”

Robin graduated high school in 2004 and became a State Tested Nursing Assistant (STNA), in 2005. She says, “I didn’t want to go to college right away because I wanted to travel and have fun!” She traveled around several states in the US and then returned home to be with her family during her mother’s battle with cancer. She went back to school in 2006 to become a medical assistant and then nursing school in 2009. In 2010, on a Saturday in May, she completed nursing school and 2 days later started her first real nursing job. She was not officially a nurse until June 1, 2010, after passing the NCLEX exam (on her first try), and has worked as a full-time nurse ever since!

After starting her career, Robin met her soon to be husband and after a short romance (3 months) they wed in October 2011. Madison, their first child, was born October 2013 at 41 weeks with no complications via C-section (after Robin had been placed on bed rest due to preeclampsia). Robin continued working as a nurse until her second child, McKenna was born in December 2017 at 39 weeks a scheduled C-section. Robin loves her career and continues to work although with taking care of Madison and McKenna, it can prove to be taxing at times.

So, how does a healthy 32-year-old, successful, Licensed Practical Nurse and mother of two find out that she has 22q11.2 Deletion Syndrome?

After a normal pregnancy, her second daughter, McKenna was born with Truncus type 2, an interrupted aortic arch type B, and had a seizure shortly after birth (due to very low levels of calcium). McKenna tested positive for 22q11.2 Deletion syndrome, so her Genetic Counselor with the 22q Clinic at Cincinnati wanted to test Robin and her husband as well.

As many parents know, this was not an easy task. The insurance company did not want to approve testing since they claimed it did not affect McKenna’s quality of life or well-being. The Geneticist resubmitted the request for a FISH test instead of a Microarray test, the insurance approved and it was confirmed Robin had 22q. Robin then had an echocardiogram, which revealed an aberrant right subclavian artery, which can be associated with 22q.

It is a loving and uneventful upbringing in a great family, a good education and now a full adult life with a family and career.

“I realize I am not a typical individual with 22q”, Robin adds. “I had a very healthy childhood and I now live a great life. If McKenna was not born with 22q, I would have never have known about myself, so I want to raise awareness and help as much as I can with this,” says Robin. “I believe this is my calling now and my purpose.” 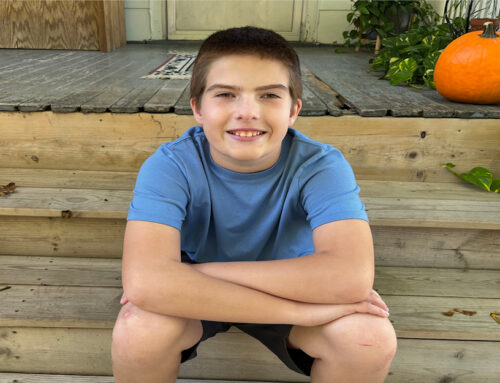